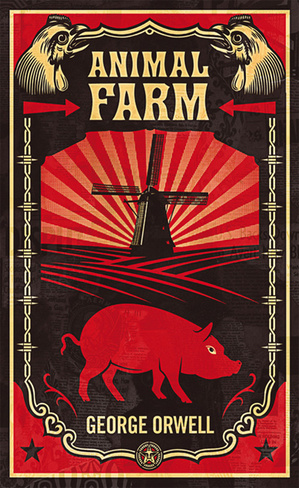 “At the Meetings Snowball often won over the majority by his brilliant speeches, but Napoleon was better at canvassing support for himself in between [Meetings]” ( Orwell, Pg. 63) This is an example Napoleon’s and Snowball’s diverse leadership strategies, in George Orwell’s Animal Farm. In the novel, the animals take over Manor Farm because Mr. Jones, the farmer, is often too drunk to feed the animal’s. They are rallied to rebel by an old boar, Old Major, who dies soon after. The pigs, who have superior intelligence to the other animals, gain control of the farm. The follow Old Major’s principles, now called “Animalism.” The Main influences on the Farm are the pigs; Napoleon, Snowball, and the propagandist Squealer. Squealer answers to Napoleon, so the main influences are really only Snowball and Napoleon. At first, their leadership types balance each other's control, but it becomes obvious that their leadership styles are incompatible and Napoleon takes over the farm. The most outstanding differences in leadership between Snowball and Napoleon are their ideals, the way they interact with the other animals, and their methods of gaining loyalty and control.


Napoleon and Snowball have highly contrasted ideals. Napoleon is a tyrant. He wants all the animals to be at his command so that he can live in luxury, while snowball seeks the education of the animals and the success of the rebellion. “Snowball had made a close study of...the Farmer and Stockbreeder and was full of plans for innovations and improvements.” (Orwell, Pg. 63) This example shows that Snowball’s motives have less to do with himself and more to do with bettering the farm. His ideals center on the improvement of Animal Farm. He follows the tenets of Animalism, but lets the small things slip. His only selfish desire is his hunger for knowledge. Napoleon, on the other hand, is a very corrupt leader. “He was always referred to in formal style as, ‘our leader, Comrade Napoleon.’” (Orwell, Pg. 99) Napoleon enjoys the glory of being dictator because he gets what he wants. His ideals center on himself and his own desires. The animals not only bend to his every whim, but also give him the credit for any positive event, even if he had nothing to do with it. Snowball, while not completely free of corruption, often provides the logical alternative to Napoleon’s ways. When they are both in power, the pigs’ manipulation of the other animals is still there, but not yet out of hand. Another quality of Snowball is bravery, he fought and led the Battle of Cowshed while Napoleon hid inside the barn. This is another example of Napoleon’s manipulation. He uses others to do the work for him, and never puts himself at risk.


Napoleon and Snowball’s ideals affect how they interact with the other animals. Napoleon interacts with the animals differently than Snowball does. Napoleon uses intimidation and fear to keep the animals under his control. He treats them as his subjects, as if he is higher than they are. He creates a social pyramid among the farm animals and places himself on top of it. The rest of the pigs are below him, and the other animals on the bottom. A lot of the way he interacts with the animals also has to do with how he controls them.  In his mind, the other animals are not individuals but a body to which he is the brain. Not only does he use the dogs to frighten and control  them, but he also uses the threat of Jones regaining the farm. “Surely there is no one among you who wants to see Jones come back?” (Orwell, Pg. 52) Here, Napoleon uses Squealer as a mouthpiece to destroy the protests of farm animals who don’t want to stray from animalism by reminding them that farmer Jones is still out there. He is manipulating their thinking, or thinking for them, just as he does when the pigs alter the Seven Commandments. When this happens, the other animals aren’t sure if The Commandments have been changed or if they just don’t remember the original ones, because the pigs have already made the animals think of themselves as unintelligent and short of memory. Snowball, however, wants to educate the animals. He wants to give them minds of their own, but some of them don’t want to make choices or learn. They are used to being controlled by Jones and some of them are reluctant to be controlled by themselves. Snowball wants the animals to be free and to help free all the animals in the world with Animalism. He treats them with kindness and gladly explains to them what they don’t understand.  “The flag was green, Snowball explained, to represent the green fields of England, while the hoof and horn signified the future republic of the animals which would arrive when the human race had finally been overthrown.” Snowball’s lust for rebellion against humans and his fervor for animalism are what motivate his leadership. Napoleon views the animals as a whole to be manipulated and Napoleon views them as individuals to whom he is equal. The way Snowball treats the animals is probably the more efficient way for a leader to act, because the animals will be less likely to jump at the opportunity to rebel. The only reason the animals don’t rebel against Napoleon’s cruelty was because of the windmill project and his big dogs. Snowball doesn’t need to give them a fake project to keep them from rebelling, because they won’t rebel against him.


The ways Napoleon and Snowball gain loyalty and control also have a lot to do with how they treat the animals. Napoleon is like a dictator or a king. He uses political force to manipulate the animal’s reality and make them think he is right, which is an especially dangerous power in the hands--or trotters--of a greedy pig. To gain control, Napoleon waits until the initial rebellion against Jones is over, then he steps in and takes control of the disorganized farm. He is clever, which makes him skilled at getting what he wants. He is “not much of a talker, but with a reputation for getting his own way.” (Orwell, Pg. 35) He uses Squealer as an instrument to go around the politics of the farm, unlike Snowball who operates well within them. If Snowball had used to Squealer to his advantage, he may have gained more influence among the easily-convinced farm animals. “The animals listened first to Napoleon, then to Snowball, and could not make up their minds as to which was right; indeed, they always found themselves in agreement with the one who was speaking at the moment.” (Orwell, Pg. 66) Snowball is interested in broadening his knowledge to make the animals’ work easier. That is why he suggests the windmill project. Napoleon disagrees with him and over-rules the idea by banishing Snowball from the farm with his guard dogs. Then Napoleon comes up with his own reason to build the windmill and tells the animals to do it. When the animals finish it, Napoleon knocks it down and blames Snowball, because he doesn’t want the animals to have easier work. He he wants to keep them busy so that they can’t rebel, which is why he reinstated the windmill project. Napoleon is a tyrant and Snowball is more like a servant leader. He uses his power honestly to improve the farming conditions and spread Animalism.


Napoleon and Snowball’s most prominent differences in leadership are how they gain control, how they treat the farm animals, and their difference in ideals. Snowball gains control through the education of the animals, following Animalism, and acts of bravery. Napoleon gains control through opportunity, manipulation, and intimidation. Napoleon treats the animals like a lower social class, or as if he is the brain, they are the body, and Squealer is the mouth. Snowball treats the animals like students or fellow revolutionaries; as equals. Thus, he invented, “All Animals are equal.” (Orwell, Pg. 43) Napoleon’s ideals center on selfish ambition and lust for power, while Snowball’s center on Animalism entirely. The most efficient style of leadership is a mix between Snowball’s way and Napoleon’s. Snowball has the outlook of great leader, with good motives and ideas, but he doesn’t use tactics as cleverly as Napoleon does. Sometimes, it takes not only bravery and intelligence to lead, but also opportunity and enforcement to lead efficiently.